The Weight of Waiting 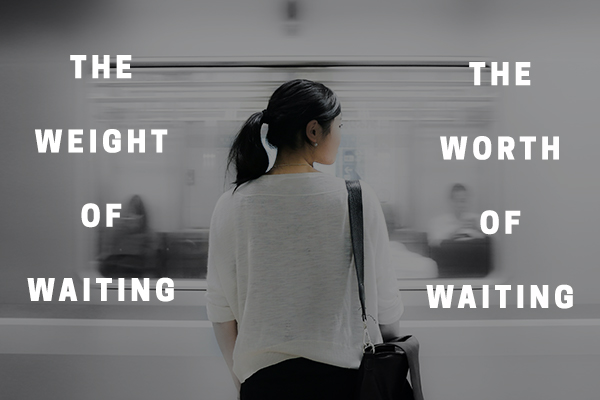 I don’t know about you, but I’m really impatient.

If you were to ask someone close to me to name my worst quality, that’s usually the first thing that would come up.

Of course, I’m not proud of my impatience. Thinking about it, though, begs the question, “Why am I like this?”

So, why do I have such a hard time waiting? Why do I have the constant feeling of longing for something more?

Oh wait, isn’t that the whole point of Genesis 3? When God created the earth, He gave everything to mankind. Adam and Eve were given all the plants and animals, and then they were called to subdue and fill it. But, even with all the earth at their fingertips, Adam and Eve questioned God’s commands. When the enemy tempted them, they did exactly what God has asked them not to do. That’s when sin entered the world and broke everything good.

All of these events mirrored the waiting and anticipation of a coming Savior.

So, why do we still wrestle with waiting?

The communion that Adam and Eve experienced was completely untouched by sin. They didn’t know what sin was until it was introduced by the serpent. When we enter into a relationship with Jesus, we experience the transformation from being dead in sin to being brought to life in Him. But since we still live in a broken world, we still wrestle with the sin nature.

This longing we have is to be with Jesus, fully perfect and without sin.

We see this in the life of Paul. Even after Paul lived life with Jesus and knew Jesus, he still experienced seasons of waiting. Specifically, in 2 Corinthians 12:7-10, we see that Paul was given a thorn that kept him from becoming conceited. Paul asked God three times to take it away, but God’s response was, “My grace is sufficient for you, for my power is made perfect in weakness.” Even Paul longed for the day when this thorn would be taken from him, but it never was. Instead, it was a reminder of the grace and power of God in his life.

Even in the waiting, we can be assured that God is doing something for our gain and His glory. Maybe we will see the waiting come to an end or like Paul, maybe not.

But, it’s still hard. To wait and not know the outcome or time frame is hard.

And yet, we have hope in and through Jesus. This leads us to remain faithful in the waiting, to be diligent in the longing, to be content in the unknown.

Dad to Fashion Designer to help his daughter

Everyday day care teacher Megan Nunez and her kids introduce themselves and spend time with 91-year-old Gene McGehee who has...

A dog is not only man's best friend, but man's most loyal friend too! That's what this sweet golden retriever,...

When Gia Peebles noticed a lack of women of color in competitive fishing, she approached four of her business owning...