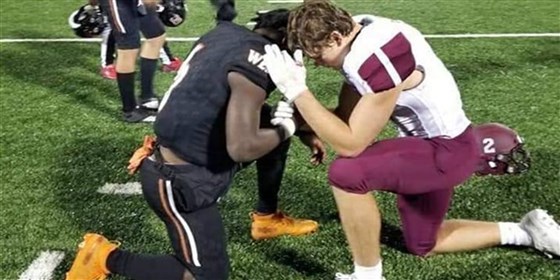 Gage Smith, a football player from Sherman High School (North of Dallas) recently played a game against Ty Jordan and his team from Mesquite. Gage had heard that Ty's mom was battling with Stage 4 cancer, so after the game ended, he asked Ty if he could pray with him. The two knelt together on the field to pray for Ty's mom, and a photo taken of them praying has since gone viral.

Rather than focusing only on crushing his opponent and winning the game, Gage Smith was concerned for the personal life and struggles of Ty and his family.

Gage's coach says this is typical behavior from him. "I see that kind of stuff weekly from him...I’m glad that other people are having the opportunity to see it, too.”

Gage later went on to say, "I would've done that whether we would've won or lost. During the game we're enemies and we're gonna play and try to win the game, but you still have that respect for the other opponent. I wanted to do that for him."

You can read more about the incredible story here.

Fan artwork conceptualizing what Jabba the Hut might look like as a baby is blowing people away. Check this out!...

The man Tim Tebow is finally married! (To the sound of women everywhere weeping uncontrollably.) He and his now wife...

Be careful what you ask for! A girl recently asked her boyfriend to take her out to hibachi - but...

Wanted to get away this weekend, so I took my dog Timber to a tiny home in Austin! They have...

Kiwi Pizza Is Dividing The Internet

First there was pineapple pizza, now there's kiwi pizza. Is there any end to the tangy fruit / pizza combos?...