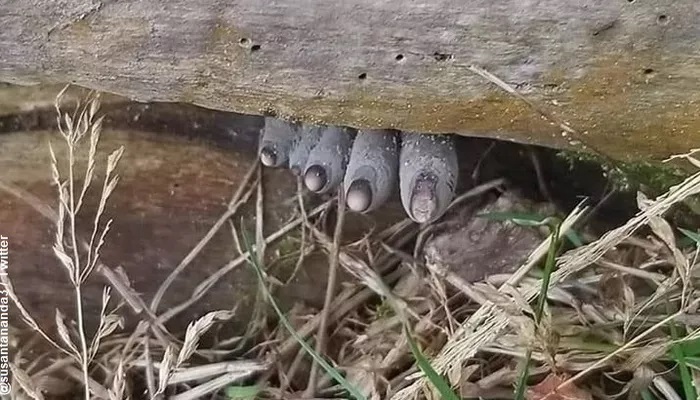 A bizarre image that popped up online earlier this week appears to show some kind of monstrous foot, although the true nature of the creepy sight is less nightmarish that one might suspect. The weird photo was posted to Twitter on Monday by Indian Forest Worker Susanta Nanda, who asked his followers "can you identify this animal?" The image features what seem to be a set of odd-looking toes sticking out from behind a piece of wood.

Among the guesses offered by Nanda's followers included a Yeti, a gorilla, or a chimpanzee. Others joked that the foot belonged to a politician with gangrene. To that end, one horrified individual theorized that the toes were those of a "human in desperate need of a pedicure." Ultimately, Nanda offered a solution to the mystery and confirmed the answers of some followers who answered correctly when he explained that, in fact, the 'foot' was actually a fungus colloquially known as 'Dead Man's Fingers.'

Trooper buys car seat for woman’s son after giving her...

A Mississippi trooper is drawing praise for his random act of kindness after he bought a car seat for a...

A video from the midwest shows a squirrel feeding on fermented pears, with predictable results.

A hug -- probably the most treasured act of comfort that most people took for granted before the COVID-19 pandemic....

One guy from Florida...any story that starts like that you know is going to end in the Knucklehead news category!posted...